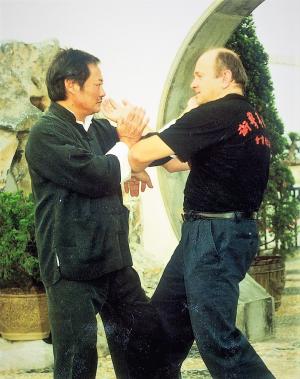 The first form of the Ving Tsun kuen kung fu system has several levels of mental exploration. Once you have reached the level of understanding Bill Jee form, you return back to Siu Lim Tao. This closed circle of 3 forms creates cycles in the form of a spiral, determining the ever higher and authentic level of sophistication of an adept.

The first step is to master the unity of posture and hands movement. Therefore, SLT is performed without physical movement of the legs, but with the constant psychophysical involvement of the entire body. Otherwise you will not feel the importance of the center (the first of the three human danitans according to Chinese philosophy). This is the place where our internal qi energy and internal strength borrowed from the opponent, earth and heaven is accumulated. A conscious presence and commitment to the spirit of shen is essential. The first dantian is the key to base the posture on the ground and to releasing the inner strength of jin through defensive and attacking limb techniques. This discharge occurs in the form of vibrations.

While the correct practice of the SLT form takes about 20-25 minutes, the tan-sau / wu-sau / fook-sau movements alone require about 15 minutes of active inner focus. Thse movements contain the basis of what is later called in Ving Tsun kuen the lat sau jeet jin exercise. Without properly mastering the lat sau jeet jin, which requires constant deepening, it is impossible to master the flow of internal force and the space-time intuitive reaction in chi sau.

The chi sau practice in Wong Shun Leung Ving Tsun kuen is not a form of fighting. It is also not, as my Sifu always emphasized, playing with the opponent's hands. However, it is an element of the reaction during the transition between no contact and a close contact before the exchange with the opponent. Chi sau allows for the first hit that will catch up with or overtake the opponent's attack, which I call only anesthesia. Only then does real exchange occur.

As for the internal strength of jin released in the form of vibration, the advanced principles of its training were adopted to Ving Tsun kuen in the 18th century from other styles on which most modern varieties of kung fu from the south of the Chinese Empire were based on (not only this advanced aspect). These were the systems of the Hakka community - Tai-cho kuen (Ng-cho kuen) and Hok kuen from the cities of Quanzhou, Zhangzhou and Yongchun (Ving Tsun) in Fujian Province (17th / 18th century) and pracrticed Samm Chien form.

I have researched this with my advanced students in Fujian, Guangdong and Hong Kong. The friendships and exchange of techniques resulted in the expansion of my fighting school's training methods. Sifu Zheng Xiaorong from Yongchun and Lee Shing Leung (Lee Kong) from Hong Kong played a special role in the transmission of knowledge between 2014 to 2016. They were also teaching Poland with  large Fujian Hok kuen seminars. During our visits to Sifu Lee Shing Leung, we discovered that a similar study had previously been conducted by my Sifu Wong Shun Leung, and that his friendship and exchange of experiences with Sifu Lee proved to be ongoing.

In the pictures (Copyrights) :

The next article in preparation (based on excerpts from the book by Dr. J. Szymankiewicz; 2012; Ving Tsun Kuen. History and concept of combat systems of Chinese secret societies) – The history of Ving Tsun kuen based on facts.