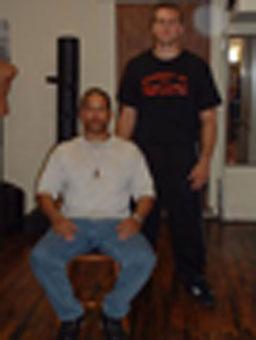 
Sifu Dale Steigerwald began his study of Ving Tsun Kung Fu in 1996 under the instruction of Sifu Dino Rhelos.  While training under Sifu Dino, he served as the active di si hing (senior student) and spent many hours with Sifu Dino and his kung fu brothers, with training sessions that often lasted four or more hours.

While Dale was in college, Sifu Dino relocated to a new area.  After graduating college, Dale moved to the greater Philadelphia area to continue his study of Ving Tsun under Master Jay Hitchman, whom he would later complete the Ving Tsun system under.   In 2006 Dale began formally teaching students the Ving Tsun system at his home and in local parks, in 2007 he established the Academy of Ving Tsun Kung Fu in New Brighton, PA where he currently teaches. Dale is currently the only active public teacher of the Ving Tsun system in the Greater Pittsburgh Area. Sifu Dale is thrilled to share his love and knoweldge of the martial arts and looks forward to sharing it with you!