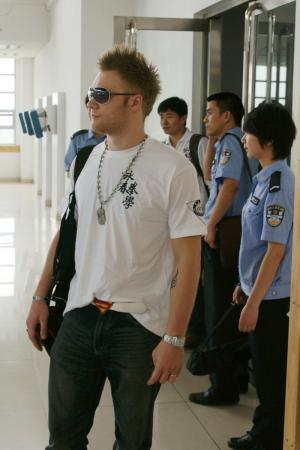 
Training in the Asian arts began aged 5, Jai Harman has a wealth of knoledge when it comes to martial combat arts. Starting with TKD and Wing Chun(ip chun lineage) moving on to Shaolin Southern Praying Mantis then Bujinkan Ninjitsu (Soke Hatsumi. Dr. Masaaki Hatsumi, Grandmaster Inheriting Soke of 9 Ninjutsu Traditions and. Founder of the Bujinkan Dojo) Then back to home-grown Amateur Boxing for Sharky's Gym in Leeds to build up a striking base. Finally moving away from England to make a life in China with his Chinese wife and their child, Jai found a diamond in the rough(quite literally), Jai took as his teacher and mentor, Master Wang Zhi Peng of then named Yong Chun Institute of Beijing. The school was located in a very VERY rustic location which meant a 20 minute bicycle ride to the closes bus stop, a 1 hour bus journey to another remote bus stop when a long walk down dusty beaten track past rows and rows of post/pre-war communist propaganda, dead wild animals and street children until he came upon what he called his diamond in the rough. As mainland China considered their cultural arts a close kept secret, Chinese teachers of the arts had to have special licences to teach to foreigners and this was a major factor in the reclusive location of Wang Zhi Peng's institute. On arrival Jai quickly found out that it was more raw and real then any art he had ever studied before. Fights were un-announced, training was grueling and painful, extreme winters with no heating and unbearable summers with no cooling. After years of group punishment and pain came the Beijing 2008 Olympics. All non-Beijing citizens and foreigners without tickets had to leave Beijing 6 months before the Olympics started, during the Olympics and 6 months after the Olympics to get the new visa rules in place. As Jai was married to a Chinese citizen, the rules did not apply to him and he had a chance to get personal, 1-on-1 tuition from a Master for over a year. During that year, Master Wang and his wife had a baby and he traveled for 1 month away to Inner Mongolia and his younger Brother, Wang Fei took over the classes. On Wang's return, Jai and Wang sat down and planned out the promotion and development of Ving Tsun in mainland China. The name Beijing Ving Tsun was born and with it 6 new schools opened in succession. Jai took on the roll of Assistant Instructor for the main school where Wang teaches, Wang Fei took on 2 other schools and Wang also juggles himself between the other 3. Beijing Ving Tsun, now open to all walks of life is a vibrant, colourful and exciting place to be when learning Ving Tsun. During the time Jai and Master Wang Zhi Peng have spent together, Jai has accompanied him on many projects including coordinating on the Yip Man Movies, teaching the leading actress for a new kung fu movie Gong Fu Yong Chun (Kung Fu, Wing Chun), converting and teaching the biggest un-militarized police force in the world the ways of Ving Tsun, defending the schools honor in challenge bouts, many many demonstrations to promote Ving Tsun to the younger (more westernized Chinese kids) and building a legacy for generations of martial artists to come. To this day, Jai Harman is the closest, most respected and well spoken of by Master Wang Zhi Peng of his thousands of students world wide and domestic. The relationship will prosper and develop for many years to come.