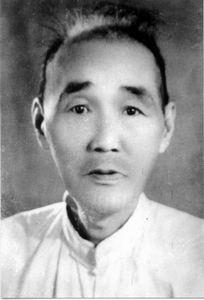 Primary Lineage:
Other - Not Listed (Email Admin to add)


In 1939, Master Nguyen Te Cong fled to Viet-Nam, since then, he became the founding father (Su-to) of Vietnam WingChun branch.  From 1939 to 1954, Su-to stayed in Hanoi, accepted and trained disciples in WingChun Kung-fu.  These disciples were Chinese and Vietnamese, among them there are several considered as his true successors, and were pictured with him (see photo).

In reality, only 2 from these 6 disciples (in the picture) open class to train WingChun, based on what they had learned from Su-To. They are the late grandmasterTran Thuc Tien (the first from the right), the late grandmasterTran Van Phung (the first from the left, in glasses).  Later on, there was also the branch of the late grandmasterNgo Sy Qui.  At the end of 1954, Su-to Nguyen Te Cong with his family went to the South Vietnam.  In the South, he continued to teach his old disciples, who followed him from the North such as GM Ho Hai Long (real name is Nguyen Duy Hai), GM Do Ba Vinh,  .  He also  accepted several new disciples (such as GM Nguyen Ba Kha, GM Luc Vien Khai) (see the photo page), some of them later open class to train WingChun. In Sai-gon (now is Ho-Chi-Minh City), Su-to Nguyen Te Cong and his family lived in  Dong Khanh Alley, Cho Lon district.  In the afternoon of 23/6/1959 (i.e. 18/5 lunar calendar) He passed away after 2 days since acquired disease.  His body was buried in The Canton graveyard, Cho-lon district.   I have heard that this graveyard was moved away to clear land for building the Dam-Sen Park.  Therefore, at the present, it is not clear where his grave moved to.  In April2004, I  (Nguyen Ngoc Noi) - disciple of the late grandmaster Tran Thuc Tien - had advertised in the daily newspaper "Sài Gòn Giải Phóng" (consecutively in 3 issues) in a hope to find the family of the son of Su-To Nguyen Te Cong , however, no response until now. Hopefully, through this website, if anyone has any information on Su-to (and his grave as well) and his family, please kindly let me know through this email address Vietnam WingChun. I am very grateful. (Note that: we had found his grave in 10/2005.  See details in the article "The grave of GM Te-cong has been found in Binh duong Province Graveyards.")

Two months before he passed away, on 25/4/1959, Su-to Nguyen Te Cong let his disciples take a picture of him while practicing Wooden Dummy Techniques.  Fortunately, this picture is preserved and became a priceless as a historical mark of Vietnam WingChun.

At the beginning of 1977, doctor Nguyen Khac Vien, used to be a disciple of the late grandmaster Tran Thuc Tien, invitedthe late grandmaster Tran Thuc Tien to show several WingChun techniques (including 108 form, Chi-sao, and Nei kung) for filming in a documentary on physical exercises.  One his disciple - Ms Nguyen Thi Bich Van - also participate with him.  The documentary was still kept today.  This is extremely precious memory of our teacher for Vietnam Vinh Xuan Noi Gia Quyen.

In cold days, late January 1980, partly due to the city electricity network broken down, the late grandmaster Tran Thuc Tien health got worse, as he already was paralyzed due brain hemorrhage.  In the Vietnam-Cuba Hospital (92 Tran Hung Dao st.) on  7/2/1980 (i.e. 21/12 lunar calendar) he passed away at the age of 69.  At the moment there were his wife (Sư nương) - Le Thi Lang, his son - Trung, a nurse, and I (Nguyen Ngoc Noi, his disciple). He was buried at the Van Dien cemetery, Hanoi.  After exhumation, he was moved and reburied in the Yen Ky cemetery, Son Tay.  On the funeral day, one of his disciple -Le Kim Giao- wrote an oration, mentioning  his reputation and his karma, since he met Su to Nguyen Te Cong.

On 5/7/2004 (or 18/5 lunar calendar), the 45 year anniversary day since Su to Nguyen Te Cong passed away, the Web site of Viet nam Vinh Xuan Noi gia Quyen (Viet Nam WingChun in short) was officially published on the net.  From deep inside our heart,  we sincerely dedicate the site to Su-to Nguyen Te Cong and our Si-fu Tran Thuc Tien.  Owing to them, Viet Nam WingChun established and develop widely today, and  WingChun disciples in Vietnam fortunately acquired quintessence of WingChun - the marvelous  and mysterious invention over thousands years of humankind.  To their souls, we promise to develop and contribute to WingChun with all our greatest efforts.