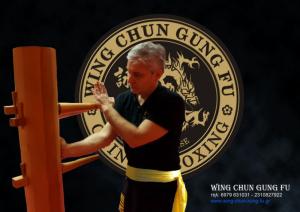 SiFu Nikos AgathopoulosBorn in 1962 in Germany by Greek parents. He came to Greece in 1974. With the martial arts he worked from the age of 14 years.His love for the martial arts was so great and stre END_OF_DOCUMENT_TOKEN_TO_BE_REPLACED
primary teacher/lineage
Teacher Name
Rank Sifu Agathopoulos Obtained
Still Affiliated?
George Touzozoglou
No Formal Rank (Unknown Level of Mastery)
No

His love for the martial arts was so great and strengthened even more by the change of environment had when he came to Greece.

The concept of style in the martial art is the same directly associated with the development of the same teacher, at a point statikopoiisi for reasons of prestige, would be a brake on further developments.

He does not deny any distinction even building the technical issues. He is open to new ways and receptive to new innovative ideas.

However considers himself quite formed, on the relationship teacher - pupil. He also thinks that he is always on the right track with the standard top Kung Fu, where authority is associated with the scene in the world of martial arts but is also based on his life.

Mr Agathopoulos states in his profile biography that he is under the supervision of instructor leaders of Greece, Masters George Touzozogloy and Christos Vafeiadis. As the only official authorized chairman of Traditional Wing Chun of Greece, as well as the official representative of Grandmaster William Cheung for the last 25 years, I hereby state that the Chief Instructor for Greece is Master Dimitris Exintavelonis. However, due to a terrible car accident who left him half paralyzed, his place has been taken over by Sifu Chrisa Exintaveloni, who has trained hard for years with him, with me too and most importantly, she has trained intensely for months, privately with Grandmaster William Cheung. Mr Touzozoglou and Vafeiadis have left the William Cheung association long ago and are now leaders of their own academy who they have created themselves and are in no way affiliated with Traditional Wing Chun and Grandmaster William Cheung. However, they have indeed been taught by his student, Dimitris Exintavelonis before, and they in return have taught Mr Agathopoulos, who is surely a fine man and Sifu, but he should correct his biography notes and not state within it inexistent claims and nonsense, as he only hurts himself this way. Sifu Panos Raptopoulos