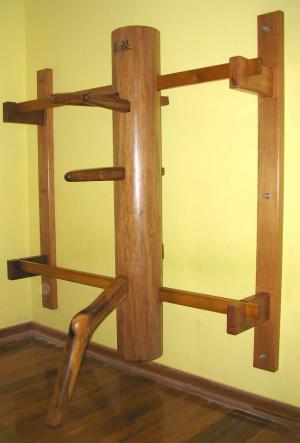 The muk yan jong has three arms and one leg, which represents an opponent’s body in various positions. The wooden slats on which the muk yan jong is traditionally mounted have a springiness that is similar to a human opponent’s involuntary reaction and allows the user to practice absorbing energy into his stance.

Practicing with the muk yan jong should involve the use of the whole body. All of the principles evident in the three Wing Chun routines should also be evident in muk yan jong practice.

Traditionally made from wood, the muk yan jong can now be made from steel and plastic. No matter what material is used, it is still called a “wooden man post.”

Many people have different opinions and concerns when buying a dummy. One of the most common, besides getting Dummy’s made to their Sifu’s specifications, is whether or not the arms are offest or not.

Off-Set Arms means that the top two arms are made out of line with the post that runs into the dummy. If you compare it to the middle dummy arm they should be different. The post is aligned with the top of the arm, not the middle. When placed in the dummy the top arm is placed so it sits lower, and the second off-set arm is turned upside down and place in so it sits higher. The in effect makes the tips of the two arms closer to parallel. The extent of the offset varies from about an inch or two different in height to making the arm tips perfectly parallel with each other. Non-Offset arms have a huge difference in height level. A lot of poorly made Wing Chun dummies do not have off-set arms, and there is not any evidence put forth so far as to why the arms should be non-offest; all of the arguments are on how FAR the arms should be off-set (see below).

Traditionally the arms are off-set but the tips are not parallel to one another. Common reasons cited for the non-parallel arms:

Arguments for the Parallel Off-Set Arms.

However many people today prefer the arms to be exactly parallel, especially in certain Wing Chun lineages. This is especially true of William Cheung’s Traditional Wing Chun. Common reasons cited: