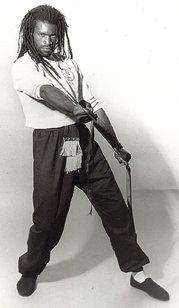 Sifu Brian Desir started out in the martial arts in the summer of 1978. Coming from a boxing background Brian was introduced to the art of fighting by his father. Fighting ability, combined with a lov END_OF_DOCUMENT_TOKEN_TO_BE_REPLACED
primary teacher/lineage
Teacher Name
Rank Sifu Desir Obtained
Still Affiliated?
Austin Goh
No


Sifu Brian Desir started out in the martial arts in the summer of 1978. Coming from a boxing background Brian was introduced to the art of fighting by his father. Fighting ability, combined with a love of technique rather than straightforward violence, led him into the martial arts.

Brian, being a great fan of the Ring King Mohammed Ali, always thought that boxing was the ideal fighting method. He had cousins that taught Karate and used to visit their clubs. During sparring sessions with his cousins a kick would occasionally catch him, but once in close he would open up with his fists and his opponent would be helpless. Although Brian had always had a respect for the martial arts it wasn't until he saw his first Chinese martial arts movie, Secret Rivals II, that he decided martial arts were for him. "It was like being in Rome at the Coliseum and watching the gladiators for the first time. It was like nothing I had ever seen before"

Brian continued with training in boxing, but started searching out local martial arts clubs. His first teacher in Luton taught him Warr Gar and although he enjoyed the style, he decided it wasn't really him. He continued training in the style for a while and maintained his boxing until October 1981, when he met Master Austin Goh for the first time.

Brian trained for some time under Master Goh in China Town, London, before becoming an instructor and opening his own school in his home town Luton in spring, 1985. As well as teaching martial arts, Brian involved the school in performing for the public and raising money for charities.

In 1989, Brian met Master Samuel Kwok and Grandmaster Yip Chun. The system taught by Master Kwok was somewhat different from that of Master Goh and Brian began learning the entire system again. From Master Goh, Brian had gained his strength and fighting ability as well as learning how to use many weapons. Sifu Kwok taught Brian the finer points of the system in its traditional form as taught by the late Great Grandmaster Yip Man, (teacher of Bruce Lee).

Since then Brian has travelled all over the Far East studying many other martial arts styles to increase his knowledge of the martial arts. The arts Sifu Brian has studied include Chinese Boxing, Iaido (Japanese way of the sword), Mogendo Boxing and Thai Boxing, which he studied in Bangkok.

Sifu Brian has always had good relationships with his instructors and holds the utmost respect for them. He feels that the best way to respect these instructors is to pass on the knowledge gained in the most accurate and effective way possible. Sifu Brian has seen the results of bad teachers, and it is for that reason that Sifu Brian Desir set up East Anglia Wing Chun Athletic; so that authentic Wing Chun could be taught to those who wished to learn its true form.

Over the years Sifu Brian Desir has achieved Instructor qualification under Masters Austin Goh and Samuel Kwok and Grandmaster Yip Chun. He is a member of the Ving Tsun Athletic Association of Hong Kong, as well as a member of the Yip Chun Academy, Hong Kong.

Sifu Brian is currently teaching in the South of England, passing on his knowledge and experiences.