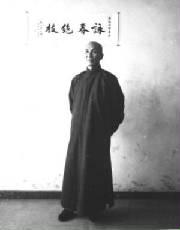 The "GrandMaster" title given to Yip Man is honorific.  He never claimed to be a grandmaster during his lifetime.  He was the last (15th) student of his teacher, and was seen with other Wing Chun masters of his time.  His training with his kung-fu unkle, Leung-Bik, greatly enhanced his knowledge over that of his kung-fu brothers, but he was humble in this regard and never claimed superiority over the Wing Chun family.

Add
A Chronicle of the Life of Grandmaster Ip Man.
History of Wing Chun

(this bio is copied from WikiPedia at the moment. If you have a better version, please let us know - this is not that great).

Yip was born to Yip Oi-dor and Ng Shui, and was the third of four children. He grew up in a wealthy family in Foshan, Guangdong, and received a traditional Chinese education. His older brother was Ip Kai-gak, his older sister was Ip Wan-mei and his younger sister was Ip Wan-hum.

Yip started learning Wing Chun from Chan Wah-shun when he was 13, and was Chan's last student as Chan accepted him at the age of 70. Because of his teacher's old age, Yip had to learn much of his skills and techniques from Chan's second oldest disciple, Ng Chung-sok. Chan died three years after Yip's training started and one of his dying wishes was to have Ng to continue teaching Yip.

At 15, Yip moved to Hong Kong with help from a relative, Leung Fut-ting. One year later, he attended school at St. Stephen's College, a secondary school for wealthy families and foreigners living in Hong Kong. In an incident while studying at St. Stephen's, Yip intervened after seeing a foreign police officer beating a woman. The officer attempted to attack Yip, but Yip struck him down instead and ran to school with his classmate. Yip's classmate later told an older man who lived in his apartment block. Yip was invited to meet that man and was asked by the man what martial art he practiced. The man then told Yip that his forms were "not too great". Yip was then introduced to chi sao (a form of training that involves controlled attack and defence). Yip saw this as an opportunity to prove that his abilities were good, but was defeated by the man after just a few strikes. Yip's opponent turned out to be Leung Bik, Chan Wah-shun's senior and son of Chan's teacher, Leung Jan. After that encounter, Yip continued learning from Leung Bik.

Yip returned to Foshan when he was 24 and became a policeman. He taught Wing Chun to several of his subordinates, friends and relatives, but did not officially run a martial arts school. Some of his better known informal students were Lok Yiu, Chow Kwong-yue (周光裕), Kwok Fu (郭富), Lun Kah (倫佳), Chan Chi-sun (陳志新) and Lui Ying (呂應). Among them, Chow Kwong-yue was said to be the best, but he eventually went into commerce and stopped practising martial arts. Kwok Fu and Lun Kah went on to teach students of their own and the art of Wing Chun in the Foshan and Guangdong region was mainly passed down from them. Chan Chi-sun and Lui Ying went to Hong Kong later but neither of them accepted any students. Yip went to live in with Kwok Fu during the Second Sino-Japanese War and only returned to Foshan after the war, where he continued his career as a police officer. Yip left Foshan for Hong Kong in 1949 after the Communists established the People's Republic of China on the Chinese mainland.

Yip was known to be an opium addict, and he obtained opium illegally from the black market. The cost of opium was considered high at that time and Yip needed a dependable source of income to support his opium smoking habit and his family members, who were still living in Foshan. As such, he opened a martial arts school to teach Wing Chun. Initially, business was poor because Yip's students typically stayed for only a couple of months. He moved his school twice, to Hoi Tan Street (海壇街) in Sham Shui Po, and then to Lee Tat Street (利達街) in Yau Ma Tei. By then, some of his students had attained proficiency in Wing Chun and they were able to start their own schools. Some of his students and descendants sparred with other martial artists to compare their skills and their victories helped to increase Yip's reputation. In 1967, Yip and some of his students established the Hong Kong Wing Chun Athletic Association (香港詠春拳體育會).

Yip also left behind a written history of Wing Chun, whose factual accuracy has been debated. He filmed three of the five Wing Chun forms before he died. Many other artifacts of Yip's life are on display in the "Yip Man Tong" museum in Foshan, China.

Ip Man, a film loosely based on the life of Yip Man, was released in 2008 and starred Donnie Yen as the martial artist. The film takes a number of liberties with Yip's life, often for dramatic effect. Yip's oldest son Ip Chun appears in the film and served as a consultant for the film. The film focuses on Yip's life during the 1930s to the 1940s during the Second Sino-Japanese War. The film is the first to be based on the life of Yip. The sequel to the film focuses on Yip's beginnings in Hong Kong and his disciples, which includes Bruce Lee.

Another film based on Yip Man's biography, The Legend is Born – Ip Man, was released in June 2010. The film was directed by Herman Yau and starred Dennis To as Yip Man. Ip Chun makes a special appearance in the film as Leung Bik.

Wong Kar-wai is reportedly working on his own biopic titled The Grand Master. The film has been in development hell and will feature Tony Leung Chiu-wai as Yip. However, it was revealed that Wong's five-year rights to make the Yip Man biopic had expired.

With the recent surge of Yip Man-related film projects coming up in the pipeline, Donnie Yen has told the Chinese media that after Ip Man 2, he will no longer play the Wing Chun master anymore, stating "I would never ever touch any films related to Ip Man. This will be my final film (Ip Man 2) on the subject. Whenever something becomes a success, everyone would jump on the bandwagon, this is very frightening. Did you know how many Ip Man films are in production? Under such condition, we would not progress, it'd only lead to over-saturation of the subject matter."

Yu Chenghui played Yip Man in The Legend of Bruce Lee, a 2008 TV series based on the biography of Bruce Lee, one of Yip's students.