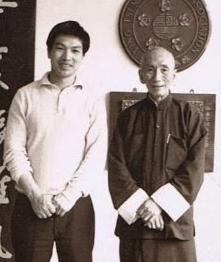 In oral tradition passed on to Dave Richardson, Master Choi was a private student of Grand Master Ip Man in Hong Kong, when Ip Man began to accept students. Master Choi (born in 1939) began his training with Grand Master Ip Man in 東莞新街 Dung Gun San Gai which was the name of 利達街 Lei Dat Street when Master Choi first joined Ip Man's Wing Chun school. The street name was changed a few weeks later to Lei Dat Gai.(利達街) Ip man had only been in that location for around 1-2 weeks when master Choi was accepted as Ip Man's student. Grandmaster Choi recounts with me that it was fate that allowed him to cross paths with GGM Ip Man. As a young schoolboy in Hong Kong, Sifu Choi got into some trouble with young gang members by sticking up for his friend who was being targeted by the gang leader. This drew the attention of the gang to himself and they would wait for him and his friend after school. This trouble continued and it was then arranged for a family friend to escort him home. This older friend told him of a Kung Fu master ( Ip Man) that might be able to help him with his current problem, but this master (Ip Man) was very expensive. Sifu Choi's parents were relatively wealthy because they ran multiple businesses, and he had access to money and was able to afford the tuition fees, so the introduction was made. However, Ip man didn't accept him straight away just because he offered money. He had to find out what this young boy was like and if he was of good character etc. After explaining his situation to Master Ip Man, he was accepted as a student. Thus began his relationship with his Sifu, and as such he was just lucky to be in a position at that time to be able to help Ip Man during a period when life was paricularly challenging for the Grandmaster. Sifu Choi explained to me that then, just as now, a student must be able to open his master's heart, so that he will then teach the student openly and without reserve. (Think about it, you wouldn't share anything you have with someone you don't really know or trust, would you?) And that is precisely what he did, he built a relationship with his Sifu that earned him a place in Ip Man's heart. Not only did he frequently take Ip Man out for yum cha and dinner, he also did other chores and errands for his master. It was during these times over Yum Cha & dinner that a lot more of the intricate details of the system were discussed. (I myself can attest to the fact that so much more can be learned about Wing Chun over numerous yum cha with your Sifu because when spirits are high and conversation is flowing, many gold nuggets of wisdom and information are passed on in conversation). Sifu Choi basically ensured that Ip Man didn't have any worries with regards to his everyday needs. There were other students who had similar experiences and looked after Ip Man also but maybe didn't have the financial ability to be able to provide for him in the same way. Sifu Choi recalls, "If Ip Man hosted Yum Cha for other masters, students or anybody else for that matter, he knew that the bill would be looked after by me, no problem. If he asked me for money, I would give it. I wouldn't ask what it was for, I would just get it". But this was only part of the relationship, Sifu never questioned his masters requests, nor did he openly disagree with any of his masters doings. This was none of his business, however, he did do whatever he could to ensure that his master was comfortable. This respect is what allowed him to gain a place in Ip Man's heart. GGM Ip Man taught in a traditional way and gave the student what they needed based on the individuals nature and also the strengths and weaknesses of the disciple. Some of the students from this time period were taught how to use the martial aspect of Wing Chun over the internal aspect. This was because they showed interest and ability in this field and they would be good candidates to promote Ip Man's school and the efficiency of Wing Chun in challenge matches. GM Choi was not interested so much in proving himself in these challenge matches, but he would spend every afternoon/evening and weekend training at Lei Dat St club. Ip Man saw this talent & unbridled enthusiasm for Wing Chun in the young Master Choi and shared with him 4 books to copy detailing the art of Wing Chun Kuen and also Wing Chun's Qi Gong & Dit Da. And with this knowledge contained in these books GM Choi has continued to develop the Qi Gong of Wing Chun Ling Tung Gong into its current form. Grand Master Choi emigrated to Australia in the late 1959 and at the time only taught a few friends privately. After a visit back to Hong Kong early in 1972, GGM Ip Man asked GM Choi to open a school here in Australia, reluctantly he agreed as he had no interest in teaching formally, but his Master requested it and he diligently obeyed but said that he would teach for 5 years then pass the school over to his students. Which is exactly what he did and so the first Australian Wing Chun school opened as the VCK KungFu Centre in 768 George Street Sydney. This school closed in the late 1970's. Since then he has continuously studied and refined Wing Chun Ling Tong Gong and has privately taught only a handful of students who sought him out.