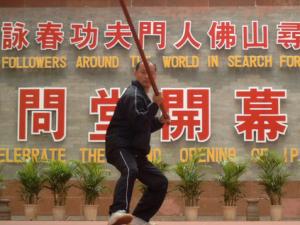 Websites/Social Pages: Wing Chun Kung Fu lessons in and around the Essex area!

Sifu Kwok Cheung originally set up this Association in Year 1991. The Association was then called United Eastern Combat with an idea to focus on martial art excellence. The name itself was to remind u END_OF_DOCUMENT_TOKEN_TO_BE_REPLACED
primary teacher/lineage
Teacher Name
Rank Sifu Wan Obtained
Still Affiliated?
Ip Chun 葉準
Sash System - Gold Sash
No


Sifu Kwok Cheung originally set up this Association in Year 1991. The Association was then called United Eastern Combat with an idea to focus on martial art excellence. The name itself was to remind us to be open-minded and to always welcome ideas from other martial art friends. However Sifu Kwok’s passion and loyalty towards Wing Chun proved too strong. This meant that communicating with other martial artists and the promotion of the Association was neglected in favour of personal training both in the UK and Hong Kong.

With each passing year and accumulation of skills and knowledge he proved his worth when in 2001 Grandmaster Ip Chun sat him down in the VTAA head quarter and discussed with him in changing the school’s name. It was Grandmaster Ip Chun’s wish to have representation in the south region of UK. So in year 2001 UEC became UK South Region Wing Chun Association, one of the largest quality Wing Chun Kung Fu associations in and around the London / Essex area.

UK South Region Wing Chun Association has worked relentlessly to promote the quality of Wing Chun. Its primary goal is to bring out the best in its members in the hope that good knowledge will be passed on to generations to come. This means also that this Association invest heavily in its members whether it is in time or in financial backing. We have had and will continue to offer from time to time such as sponsorships for students to travel to Hong Kong for training.

We have also invested in teamwork development excursions, as we believe that our Association promotes good nurturing for our future representatives and good additions to the community. Our Association have also paid for events such as BBQs, seminars, day trips, etc.

All the Instructors in this Association have a mutual believe that they are not only teaching Wing Chun, but have a great responsibility in the caring for their students to listen to them, to be aware of their needs, and to guide them along this sometimes turbulent path. Ultimately our Instructors understand that without our members we are not an Association.