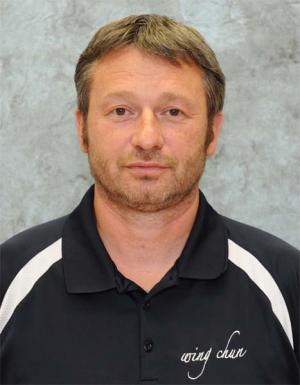 Heinz-Josef Flecken was born in 1963 in Geilenkirchen, Germany. At the age of 5 he started with Judo, which he continued to learn until his 18th year. From his 15th Year he dabbled in various mar END_OF_DOCUMENT_TOKEN_TO_BE_REPLACED
primary teacher/lineage
Teacher Name
Rank Sifu Flecken Obtained
Still Affiliated?
Samuel Kwok
No

Heinz-Josef Flecken was born in 1963 in Geilenkirchen, Germany. At the age of 5 he started with Judo, which he continued to learn until his 18th year. From his 15th Year he dabbled in various martial arts such as Karate, Tae Kwon Do and Kung Fu’s different styles until he found Wing Chun in 1982. This system seemed to have everything, what he expected of a combat sport. The system was quick and straightforward, just the pure self-defense. In 1982, he came to the EWTO. There he trained until 1989. From 1990, Heinz-Josef traveled to different spots in Europe, to learn more about Wing Chun and to meet other masters, so he could study their views and ideas of the Wing Chun. 1996, Heinz-Josef spots then IATWC (International Association of Tradtional Wing Chun). In 2000 he met for the first time, Ip Chun and Samuel Kwok in Cologne. This meeting gave his Wing Chun once again a new direction. Heinz-Josef travels went towards Hong Kong directly to the sons of Ip Man's. Since 2001, he has trained under Samuel Kwok and Ip Ching. In the end of 2000, it came by his international relations, that Heinz-Josef was invited to travel for the first time in the U.S. in order to give a seminar. In the years that followed, he would provide more seminars in the U.S., Italy, Netherlands, Denmark and Germany. As Heinz-Josef always felt that it should a good martial artist should have large and diverse knowledge of so many different Martial Arts as possible. Thus, in 2004 he founded the Hua Long Martial Arts Center. In this Martial Arts Center, Heinz-Josef invites Martial Artists from a variety of combat sports martial arts, so all students can make a picture about these styles and with that they can expand their knowledge. Early in 2008, Heinz-Josef was asked by many of his students to provide professionally appropriate techniques. These students were from the police, military, personal protection, security services and the judiciary. Thus, in mid 2008 the DEF-CON-TEC. DEF-CON-TEC (Defence and Control Techniques) was founded. It is specifically tailored for these occupations and is taught only to those people. Since 1984, Heinz-Josef also trained the Filipino Arnis, first the Latosa system and since 1999 as a private student of Alfred Plath, the founder of IRAF (International Real Arnis Federation). In 2004, Heinz-Josef received his trainer license of the IRAF.