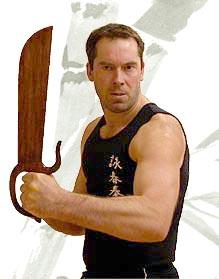 
Master James Sinclair began his martial art studies in 1972 when he started a karate style under the guidance of Sensei Alan White. Sensei White instilled in James the martial art spirit that he carries to this day. Even though James later left to train in Wing Chun, he has always held his first teacher in high regard. The first influences that any person experiences are so important and, through Sensei White's encouragement and example, James has been left with a lasting legacy of Martial Art Spirit.

Master Sinclair has gone on to meet and train with many, much more 'famous' martial artists who did not have an ounce of the manners and self respect that Sensei White displayed. It is a sad a situation when these 'names' simply turn out to be ruled by ego, and are often guilty of psychological abuse, and sometimes physical, of those students in their ward. Master Sinclair sees it as a a great honour and responsibility to teach willing, eager minds. A lot of people take to martial arts to look for positive role models for guidance. There is great potential for personal growth. Students have made a personal choice to undertake a challenge in their lives and are willing to put their own experiences second to the teachers. They take on the addage of 'emptying their cup....'

Master Sinclair, went on to train in Wing Chun Kung Fu for a decade in Essex & London. Showing total one mindedness and dedication and soon became a senior student and even represented his teacher at British Kung Fu Council and Martial Art Commission events.