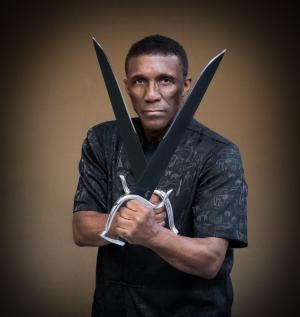 Master Phillip Redmond's martial arts career started after his first of two tours in Vietnam. After his first tour he was stationed in Okinawa. While he was stationed there he had the opportunity to s END_OF_DOCUMENT_TOKEN_TO_BE_REPLACED
primary teacher/lineage
Teacher Name
Rank Sifu Redmond Obtained
Still Affiliated?
William Cheuk Hing Cheung
Sash System - Red Sash
No


Master Phillip Redmond's martial arts career started after his first of two tours in Vietnam. After his first tour he was stationed in Okinawa. While he was stationed there he had the opportunity to study with Eizo Shimabuku in Shorin-Ryu (Okinawan karate). After 4 years of duty in the Marine Corps (USMC), Master Redmond was honorably discharged in 1970 and then he moved to New York City.

After moving to NYC 1970 Master Redmond started training in Fu Jow Pai (Tiger Claw) under Grandmaster Wai Hong. During the same year Master Redmond was introduced to Wing Chun by a friend.

During Master Redmond's training in Wing Chun in NYC, he also studied many other styles. A list of the styles Master Redmond has studied or has a working knowledge of are: Hung Ga kung fu under Sifu Bill Chung of Chinatown's Hung Mun, Baat Gua from Sifu Kenny Gong, Bak Mei, Seven-Star Praying Mantis, Juk Lum, Vee-Jitsu te from Professor Florendo Visitacion, and Aiki-Jujitsu from Sensei Robert "Sugar" Crosson. Sort of an anomoly, Master Redmond speaks Cantonese which has given him a deeper understanding of the arts, and has lead to some unusual circumstances with people who were unaware of this ability. Master Redmond has earned a black belt in AikiJiu Jitsu and Kobudo from Sensei Ronald Duncan. Yoel Judah, the US kickboxing champion, trained Sifu Redmond for his first full contact bout which he won.

Master Redmond has made Grandmaster Cheung's Honor List. This is a list, compiled by Grandmaster William Cheung, of people who have contributed to The World Wing Chun Kung Fu Association above and beyond normal measures.These special people have contributed their services to Traditional Wing Chun Kung Fu for a minimum period of ten years, showing respect, dedication, honor and self-sacrifice.

In December 2007, Master Redmond was featured in Urban Dragons: Black and Latino Masters of Chinese Martial Arts, a documentary that explores the journey of urban Black and Brown men within the world of Asian martial arts.