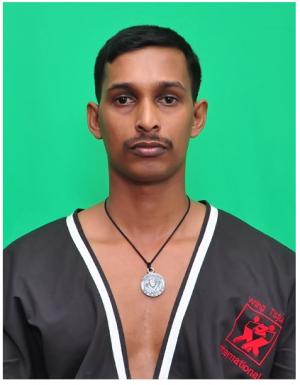 
In 1988 when Sifu Naveendra was around 13 years old he began his martial art life by practicing Budokan Karate. Later he wanted to learn the best of martial arts, so he did some research and found out that the chinese art of Wing Chun would suit him best. He then practiced several years under many teachers who were famous for teaching Wing Chun in Sri Lanka. But finally he realized that there was something missing, that he couldn’t apply the things he had learnt in street fight situations. He was disappointed and had the impression he had just wasted years of his life. After a while he heard of a teacher who had officially stopped teaching Wing Chun and had a good reputation in the Wing Chun community. It turned out that that very teacher was Sifu Ajith De Silva, the man who introduced Wing Chun Kung-Fu to Sri Lanka.

Sifu Naveendra visited Sifu De Silva, asked him to become his disciple and got accepted. He began his training as Sifu De Silva 's private student in 2001. He trained an average of 6 hours per day on 7 days a week. Sifu Ajith passed on his knowledge and experience to Sifu Naveendra without any hesitation and future expected gain. After two years of training his teacher asked him to pass his knowledge to other people by conducting classes. He started teaching classes in several places in Sri Lanka including Anuradapura, Kotikawatta, Dehiwala and Ragama. Recently he opened his Colombo school.

He lives in Sri Lanka and teaches in Colombo and some other districts too.

Sifu Ajith De Silva always used to tell Premil that Wing Chun in other countries is well developed than ours so somehow try to go to such a country and learn more about Wing Chun. By accepting his words though Premil tried establishing a contact with some of the internationally recognized masters through E-mail, it was no use.

Meanwhile Premil got to know Grand Master Thommy Luke Boehlig through internet, who implemented the idea of coming to Sri Lanka and conducting a Wing Chun training programme & to a give further training to Premil which Premil totally didn’t expect. By that time Premil also had the idea of joining Grand Master Leung Ting Lineage & undergoing a further training. With Grand Master coming to Sri Lanka Premil was able make his idea a reality.

When in Sri Lanka Grand Master Thommy Luke Boehlig conducted Premil’s training programme and he was generous enough to offer the membership as the Sri Lankan representative of Wing Tsjun International which made Premil & his school the only internationally affiliated Wing Tsjun School in Sri Lanka.