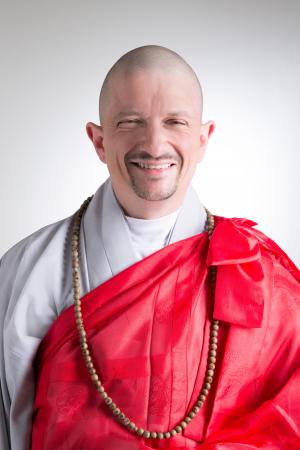 
Venerable Chi Sim (mudane name René Steininger, also know in Hong Kong as Sifu Lei Li (Cantonese name given by Sifu Ip Chun(Cantonese name given by Sifu Ip Chun meaning "Thunder Power") is the Grandmaster and World Chief Instructor of the Tao Chan Wing Chun Organisation and united first time since the burn down of the South Shaolin Monastery as an ordained Chan Monk and Abbot with the lineage dating back to Shaolin the Wing Chun and Shaolin Chan lineage and given in a formal ordination by the Supreme Patriarch the name Abbot Chi Sim to bring back compassion and Buddhist values in Wing Chun. He is a 54th Chan monk in direct lineage of Bodhidharma, the founder of Shaolin and Chan and a 81st Chan monk in direct lineage of the historic Buddha Shakyamuni and an ordinaited Buddhist monk and appointed Abbot as as well as an Assistant Professor for teaching Buddhist monks about Buddhism. He is a direct student of Sifu Ip Chun, the oldest son of Grandmaster Ip Man since 1996 in Hong Kong, studying Wing Chun already before since 1984 in Germany and being Sifu Ip Chuns oldest and only German student with a Sifu title finished the whole system.

First introduced to Judo by his uncle, who was Judo Master of South Germany, Venerable Chi Sim came in contact first with Wing Chun as a child in 1984.

After being studying Wing Chun since 1992 in a Wing Chun school in one-to-one lessons and group lessons 5 times a week until 1996 in Germany, reaching assistant instructor level, he was formally accepted by Sifu Ip Chun in his private home in Hong Kong in 1996 as direct student and got over several years in Hong Kong  private and group lessons up to Baat Cham Dao level direct by Sifu Ip chun finishing the whole system.

Venerable Chi Sim, who studied Business Adminstration on university (BBA, MBA, Economist) did grow up with Chinese neighbours related to the last Chinese Emperor Pu Yi in Germany and is one of Germanys leading China Experts, running as CEO a Chinese Consulting Company for seminars, management, law and tax consulting in his main job. He speaks besides English and German also Mandarin Chinese as well as Cantonese in which he both hold certificates of official recognized language institutes in Hong Kong. He was elected a full local member of the Hong Kong Management Association since 2002.

Venerable Chi Sim holds a Diploma of Buddhism of the Institute of Buddhist Studies of the World Buddhist University, Bangkok as well as the Dong Bang Buddhist Monk University in South Korea and got teaching permission as a Zen Master to teach Buddhism. He is also an Assistant Professor for Buddhism of the Institute of Buddhist studies, teaching educating new monks. Further education on the University of South Wales, England with a M. A. in Buddhism. After being a Buddhist monk for a shorter time in the Theravada tradition in Thailand, he became ordained as a Buddhist monk in South Korea, being a Buddhist monk student in Seonamsa Monastery for a longer time.  He is the Head Abbot of the Bodhidharma Temples in Nuremberg and Munich as well as Hong Kong under the Taego order, which is one of the largest Zen orders in the world with more than 8000 monks.

He also studied Chinese and nature medicine for several years. Venerable Chi Sim was also a close friend of the last descendant of Confucius and head of the Kongzi family, Prof. Kong Teh Cheng from Taiwan, also called the last sage of China, who certified him to teach Chinese culture in western society. He is also connected to several famous Grandmasters of Chan Buddhism in Taiwan like Venerable Master Hsin Pei of Fo Guang Shan und Venerable Master Cheng Yan of Tzu Chi.

Besides Wing Chun, Venerable Chi Sim is also active in Thaiboxing in Hong Kong and for many years a student of Master Nan (a famous Muay thay coach and former national champion of Thailand, participant of the famous K1 fullcontact world championships and trainer of severl Muay Thai Worldchampions).  He is also an active Marathon runner and finished several marathons in Germany and Hong Kong including several more than 100 km trailruns via Germanys highest snow mountains, Zugspitze which is seens as Germanys most difficult race. Furthermore, he holds a certificate as expert in wilderness survival of one of Englands leading survial schools of the British special forces.

He was also in the 90ies for several years a direct student of the Grandmaster of Wu Tang Tai Chi in Hong Kong, who was also called the Bodyguard of Tai Chi finished all his fullcontact fights against other style undefeated.

Venerable Chi Sim held several world records in Wing Chun besides taking part in the first Guiness World Record in Hong Kong in 2009.
He was the first Wing Chun Sifu and also Buddhist monk in Wing Chun history who did jump out in an altitude of 6000 m of a plane with a parachute, reducing his heart beat to meditation level by falling in meditation during free fall by using Zen meditation and then perform the 1st form of Wing Chun, Siu Nim Tao in the air. He made history again, as he climbed together with one of his senior students in 2017 the summit cross of Germanys highest snow mountain of 3000 m in a 30 km long trip over 2 days by snow and ice to display the Tao Chan Wing Chun flag on the summit, which is the highest point a Wing Chun flag was ever raised in history.

Venerable Chi Sim is calling his system "Tao Chan Wing Chun" which unites first time in 350 years the lineage of Chan (Tao Chan = Way of Chan) with Wing Chun adding the old internal monk knowledge of the Shaolin minks back into traditional Wing Chun. He use a non commercial approach and family system to bring back compassion and Buddhist values in Wing Chun under special order of the Chan patriarchy. He also added back the traditional lost groundfighting in his system, as well as the usage of all Wing Chun weapons in modern society and is the only Wing Chun lineage which still use the long old sharp traditional Wing Chun Knifes as well as the South Shaolin leather armor, which otherwise only survived in Hung Gar Kung Fu. He also added back Confucianism, Taoism, Zen Buddhism back in Wing Chun as well as Chinese medicine. In 2017 he introduced first time full contact competitions in his organization and schools worldwide.

Venerable Chi Sim is know for being very traditional and also strict with his students to develop not only their martial arts skills, but also their personality. He follows Grandmasters Ip Man rule of being "one family, being united and avoid conflicts" and usually keeps out of Wing Chun politics in generaly but also inside the Ip Chun lineage and tried to keep a low profile in the time between 1996-2012, but decided after his ordination as Chan monk to bring back the true values of Buddhism in Wing Chun to spread Tao Chan Wing Chun over all the world.
He is also know to follow Bruce Lees words, having respect for tradition, but not being a slave of it, so he tries to combine old values with the modern world, both in Tao Chan Wing Chun and Buddhism and keep his independence as well as of his organization of all other Wing Chun organizations and Sifus or Si-Hings and is well known for sometimes not agree with some ways the traditional Wing Chun Sifus in Hong Kong going if it is against common sense or ethical values or too money focused, which causes sometimes trouble with him and his Si-Hings.

To focus on his own system and reinsert the traditional knowledge back in Wing Chun without blocked by Wing Chun politic issues he agreed in March 2017 with his Sifu Ip Chun in a personal meeting after handing him over a Statue of Guanyin, the Buddhist Boddhisattva of Compassion that he will focus more on developing the Tao Chan Wing Chun as a separate system, by keeping 100 % the original Wing Chun of his father Grandmaster Ip Man to which Sifu Ip Chun fully agreed.

He is the head instructor of several Tao Chan Wing Chun schools worldwide, especially in Germany and Hong Kong and is one of the few western Wing Chun Sifu who became supported by the Chinese government. Therefore, Tao Chan Wing Chun is also recognized as independent art legally in Hong Kong, China.