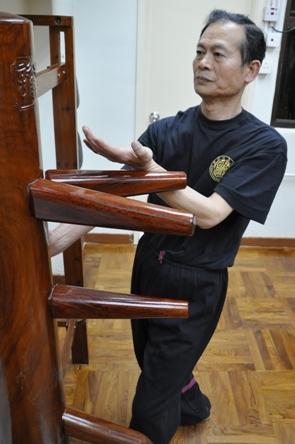 WTW: Sifu Cheng Chuen Fun, you have declined the offer of a translator and insisted on conducting this interview in English. Is it quite usual to be able to speak English in Hong Kong?

CCF: By no means, even though we were a British Crown Colony for almost 100 years. Naturally we learned basic English at school, but I only really able to practice when teaching at the WT school of GGM Leung Ting in Nathan Road. WT followers from all over the world frequently train there, and then English is the common teaching language.

WTW: Since when have been teaching at the mother school of Leung Ting WingTsun?

CCF: GGM Leung Ting appointed me chief instructor at his school in Nathan Road in 1982.

WTW: Have you been a full-time WingTsun teacher ever since?

CCF: No, not at all. I have never been a full-time WingTsun teacher. I only teach twice per week at the school in Nathan Road. The other training sessions are held by other instructors. I have always earned my living as a "bonesetter".

WTW: Does this mean that you treat bone fractures?

CCF: Not only. "Bonesetting" is part of traditional Chinese medicine. My wife and I operate two practices in Hong Kong. I have been interested in healing since my early childhood, even though I first learned martial arts (initially Praying Mantis Kung-Fu, then WingTsun) before training as a healer.

Fighting and healing belong together in the traditional Chinese martial arts, as knowledge of the body and its functions can be used either to destroy or to restore health. WingTsun training is particularly good for this skill, as one learns to observe oneself and understand physical inter-relationships.

WTW: How did you come to learn WingTsun?

CCF: When I was still at school I learned Praying Mantis Kung-Fu. Leung Ting was a classmate of mine, and was learning WingTsun at the same time, so it was obvious that we would exchange views on our newly-acquired Kung-Fu knowledge. Leung Ting was soon able to infect me with his enthusiasm for WingTsun, and I soon became dedicated to it. When he started teaching himself, I attended his classes.

WTW: We have heard that this is your first time in Europe. What are your impressions?

CCF: It’s true, this is my very first trip to Europe. When you have your own healing practice, there are few opportunities to go away for a longer period. I am only able to close it for a few days over the Chinese New Year holiday. As GGM Leung Ting wanted to celebrate his 60th birthday in Europe, this was a good opportunity for such a major journey.
I am very impressed with Italy. The people here are very hospitable indeed. They also seem to take things more slowly than people in Hong Kong. I have the impression that they know how to enjoy life more. I think I could get to like this attitude to life, and hope I can return here soon.

WTW: And what do you think of the standard of WingTsun in Europe?

CCF: In Hong Kong I have often been impressed when visiting students from Europe attend my classes. Many appear to take their training very seriously, and to have well-trained teachers back at home. This has certainly been confirmed to me here in Italy. Not only is the technical standard very high, but also the level of theoretical understanding of WingTsun. Naturally some of the training programmes vary a little, but that is not so important in WingTsun. The important thing is to absorb the right spirit of WingTsun. And it has fallen on fertile soil here.